We have presented a joint paper on real-time hydraulic simulation in the context of oil and gas well cementing at the ASME OMAE2019 38th International Conference on Ocean, Offshore & Arctic Engineering in Glasgow.

The paper "Real Time Cementing Hydraulics Simulations Bring Risk Down" (OMAE2019-95100) described the physical model and implementation of a real-time hydraulic simulator to support the well cementing operations. A summary of the performance challenges and solutions implemented was outlined. A case study of application on the simulator to detect and characterize losses in a real-life field case was presented to demonstrate the application of the simulator in production environment.

The conclusion of the paper was that the performance of the simulator allows it to be run during the cementing job execution using the data acquired from the rig as it is coming in. The comparison of simulated vs. acquired pressures and flow rates can then identify significant issues such as losses to formation and characterize them. Making that identification during the job rather than in the post-job analysis allows the operators to put remediation measures in place much sooner and therefore more effectively. Moreover, with this additional information job design can be adjusted on the fly as it is being pumped to compensate for the losses and to achieve successful cement placement.

The full paper is available from the ASME conference proceedings website.

We are currently growing our activities in the financial sector. Our previous experience in this field as well as our extensive knowledge of mathematical modelling techniques and cutting-edge programming technologies make us ideally suited to provide services to clients looking to develop bespoke software solutions such as:

With this in mind we have recently developed a demo web application providing swap valuation services, which is shown below. 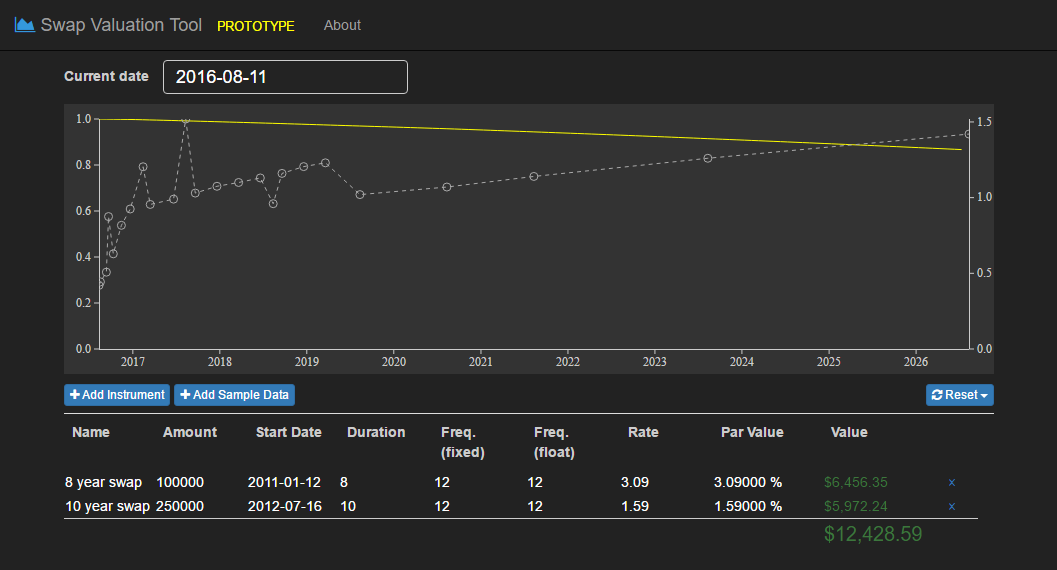 This project has been built using a modular programming approach, implementing libraries for low level features including date manipulation, yield curve construction and market data access that may be re-used in future projects. In addition the project has provided valuable experience with a number web technologies including:

While current graphics processing units (GPUs) are able to offer at least an order of magnitude improvement in processing power over current central processing units (CPUs) that have been traditionally used to perform calculations accessing this performance is frequently less than trivial. This series of articles examines some of the issues that arise when trying to optimize the performance of code running on the GPU.

Each stage of the processing of an instruction is done by a separate section of the hardware, this allows many instructions to be processed at the same time rather than waiting for each one to finish before beginning the next, as shown in Figure 2 for a 16 stage pipeline. This approach does have drawbacks however. Chief amongst these is that it may not be possible to start processing the next instruction, for example if it depends on the result of an instruction still being processed or on data still being loaded. Modern CPUs allow for this by being able to look ahead in the list of upcoming instructions to find one that can be started, this is known as out of order execution. The drawback is that the hardware to do this is quite complex and reduces the number of transistors that can be allocated to the job of actually processing the instructions. This is just one example of how the general purpose nature of the CPU detracts from its ability to do a single job, in this case processing arithmetical instructions.

In contrast to a CPU a GPU consists of a very large number of identical, simple, in-order processing elements. This structure is shown in Figure 3. These elements are simple, efficient and small precisely because, unlike a core in a CPU, they are designed only to support a limited set of primarily arithmetical operations. The remaining functions required of the GPU are performed by a much smaller number of special purpose elements which are shared between the much larger numbers of processing elements. The processing elements are organised into groups each of which shares a number of special purpose elements and other resources forming what is commonly termed a “compute core”.

While the structure of a GPU is very different from that of a CPU many of the challenges in extracting the maximum performance from it remain the same. One of the primary challenges, as alluded to above when discussing the structure of a CPU, is to ensure that all of the processing elements are kept busy, the measure of which is known as kernel occupancy. With its very different structure the GPU uses a different strategy from the CPU to maximize this.

To be able to extract the maximum performance from the GPU the structure of the problem solved by the GPU must mirror its structure. It must consist of a large number of identical tasks, or work items, each of which can be processed by one of the processing elements.

One of the most significant factors in maximising kernel occupancy is therefore to ensure that the problem to be solved is split into the optimal number of work groups each containing the optimal number of work items. This is a non-trivial task and the correct values will vary depending on the hardware. The aim being to ensure that there are sufficient work groups to keep all the compute cores occupied and sufficient work items in each work group to keep all the processing elements in the compute cores occupied. Some of the principal factors to be considered when computing the size of the work groups are listed below:

By parallelising the computations and utilizing the consumer graphics hardware now present in most modern computers, speed increases of one to two orders of magnitude can potentially be achieved when compared with the more common single-threaded CPU approach.

Achieving this is not without its challenges – we briefly outline what these  are  with a summary of how we would go about employing the approach for a particular problem and why we are uniquely suited to the task at hand.

Recent years have seen increasing interest in the concept of GPGPU computing. This can be attributed to three main factors. The first is the increasing disparity between the floating point computing power provided by GPUs and CPUs as shown in the following diagrams:

The theoretical floating point performance and memory transfer speed of the GPU is many times higher than that of CPUs. Combined with the relatively low price of the hardware and its wide availability in modern computers makes using GPGPU computing an attractive proposition.

The second factor is that along with the increase in power there has been a shift in the design of GPUs, away from hardwired devices designed to perform a few specific graphical operations and towards massively parallel general purpose computing devices. This added programmability has allowed the computing power such GPUs offer to be harnessed for tasks other than graphics.

There are no strict requirements for the code used as a starting point for the application of the GPGPU approach. The most common is perhaps C/C++ code as the language affords broad functionality and high performance but starting with existing code in Fortran, Java, Pascal or Basic is entirely possible.

For the GPGPU code itself there are three main Application Programming Interfaces (APIs) currently available: NVIDIA CUDA, OpenCL and DirectCompute. Each API affords a set of advantages and disadvantages and our current framework utilises OpenCL. Due to the considerable number of similarities between the APIs it is possible to switch between them should the project requirements demand so.

There are a number of challenges associated with successfully adopting the GPGPU compute solution to any particular problem.

More so than in the case of a conventional serial solution to the problem realising the potential performance of the GPGPU approach requires an understanding of the interaction between the overall algorithm, numerical methods used and low-level implementation details such as memory and computational task management.

Some of the main issues are:

What we can do

Each problem considered for the application of the GPGPU compute method is different and the solutions will vary considerably on a case-by-case basis. However, there are some common steps to a successful solution:

We as a company are uniquely suited to the application of the GPGPU approach to solving both new and existing problems. Apart from our personal interest in the subject area, we have:

We are looking for a talented software developer with a strong background in C++ and experience of C#/.NET WinForms. A Mathematical modelling or physics background or experience with 3D rendering technologies would be a significant advantage.